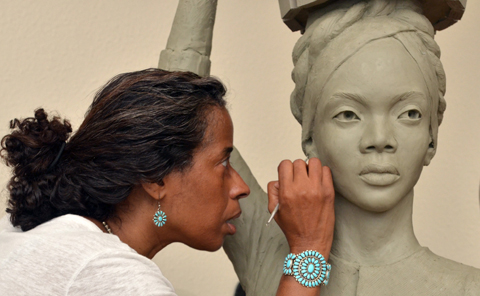 Vinnie Bagwell is an American sculptor. A representational-figurative artist, Vinnie uses traditional bas-relief techniques as visual narratives to expand her storytelling. She casts in bronze and bronze resin. She has won numerous public-art commissions and awards around the United States. She was born in Yonkers, New York. She grew up in the Town of Greenburgh. She displayed a remarkable gift for drawing at an early age and developed a passion for painting in high school. A Morgan State University alumna, Vinnie is an untutored artist and began sculpting in 1993.

Vinnie Bagwell co-authored a book titled “Study of African-American Life in Yonkers From the Turn of the Century” with Harold A. Esannason in 1992. In the mid-’90s, many followed her compelling articles in her weekly column for Gannett Suburban Newspapers/The Herald Statesman. She was also a contributing writer for The Harlem Times.

In fall 2021, Vinnie Bagwell will complete “The Enslaved AAfricans’Rain Garden,” an urban-heritage public-art project featuring five life-sized bronzes for the City of Yonkers to commemorate the legacy of the first enslaved Africans to be manumitted by law in the United States, 64 years before the Emancipation Proclamation. She will also begin creating “victory…” “an 18’’angel outside New York CCity’sCentral Park on Fifth Avenue at 103rd Street.

In 2020, the New York State Office of Parks, Recreation, and Historic Preservation commissioned the 77′ bronze of “Sojourner Truth” “to celebrate the 100th anniversary of the 19th Amendment and the WWomen’sSuffrage Movement for the Walkway Over the Hudson in Highland. The District of Columbia Department of General Services commissioned “‘What’sGoing On!” Marvin Gaye“ of the music icon, “‘he Man in the Arena”- Theodore Roosevelt.”

Contraband” and “The Immortals” The City of Memphis commissioned “Legacies” “at Chickasaw Heritage Park, and Hofstra University commissioned “Frederick Douglass Circle” The 24″ “high maquette is the centerpiece for the Frederick Douglass Museum and Cultural Center in Highland Beach, MD. Director Ruben Santiago-Hudson sought Vinnie Bagwell out to create the piano artwork for August Wilson’s play, “The Piano Lesson” for the Off-Broadway Signature Theatre in New York City. “Liberté,” a 22′ high bronze, was exhibited in the inaugural, year-long exhibition to commemorate the 50th anniversary of the Freedom Rides at the new Freedom Rides Museum in Montgomery. The creative genius of Vinnie Bagwell’s work gives voice to our stories and meaning to our legacies.