There was a small group of Africans defined more by their active participation in maritime activities than by their enslavement experience. They had seafaring skills and a gift for intercultural negotiation. 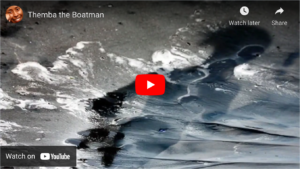 Themba represents this group. I imagine him to be a shipmate of Nicholas Cartegna on their ventures into the Madagascar slade trade, where people could be bought for as little as thirty shillings, considerably less than West African slaves.

He was designed to dispel the notion that all enslaved Africans looked beragged. The scene on his back implies that he had a conscience and, by night, aided individuals seeking freedom. Braille reads: “faith, hope, trust.” He stands upon a map of the western world, indicating the routes slave ships took around the world.